Cloudy with a chance of meatballs. Ha, with the unpredictability of this storm, I think that might actually be possible! But really, the wind and rain started sometime in the night, but it’s nothing to talk about yet. Just a normal overcast morning in Kaohsiung. If you look at the satellite images, you’ll see we’re getting the front end of the storm now, so the intensity should pick up as the storm moves over us. One positive note is that it looks like the eye is passing to the south of us, so the storm might not become nearly as severe as originally predicted. Some forecasters are saying the storm could take 12 hours to pass over Taiwan, and then there’s the crazy U-turn to contend with (more on that in a minute). Here is a recent satellite image: 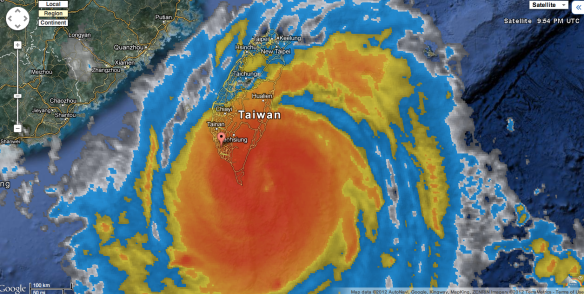 I know you can all hear Schwarzenegger saying it: “I’ll be back.” (And if you can’t, here’s a little refresher). Well, Tembin’s taking a line from the Terminator as it threatens to make a U-turn just after passing over Taiwan. Why? Because of another typhoon that will pass to the north of Taiwan and the Fujiwhara Effect.

Wikipedia (our source for all factual information, right?) says this about the Fujiwhara Effect: It is “a type of interaction between two nearby cyclonicvortices, causing them to appear to ‘orbit’ each other…When the cyclones approach each other, their centers will begin orbiting cyclonically about a point between the two systems due to their cyclonic wind circulations.” That “point between the two systems”? Taiwan. Since Typhoon Bolaven (the second system) is larger than Tembin, it will pull Tembin back toward the north after Tembin has already passed our shores. Here’s a clear diagram of the Fujiwhara U-turn: 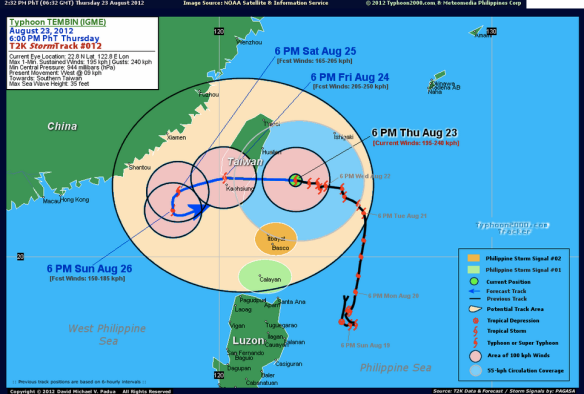 This is Weather Underground‘s latest 5-day storm tracker showing Tembin passing back over southern Taiwan and heading up the coast a second time:

And finally, the 5-day forecast for Kaohsiung:

The path and power of this storm are dependent on so many factors that I’m not even going to guess what will happen in the next few days. Right now, I’m just interested in the fact that the storm could linger all the way through Tuesday of next week if everything lines up just right (or wrong, depending on your perspective). In the meantime, I’m praying and hoping that we don’t get anything worse than what it’s doing outside right now since it’s still just a bit of rain and wind. If that actually happens, this will be a relaxing typhoon day (or weekend). But…I’m not counting on it.

[Note: I’ll post some pictures and/or video of the storm if it becomes media-worthy. Right now, there’s nothing to see, folks.]

One thought on “Terminator Tembin: “I’ll Be Back””

A Bit About Me

I am a Christ-follower, a daughter, a wife, a sister, and a mother. I am a lover of literature and writing. I find refreshment in creating art and in making music. I am a world traveler, and though I call the U.S. home, a big chunk of my heart is in Taiwan.