[To read the beginning of this story, see my post entitled “A Surprising Friendship.”]

Though I live in Taiwan, I’ve never done much of anything to celebrate Chinese New Year. Our school gives us a week off for the special holiday, and it’s traditionally been a week that I spend holed up in my apartment, enjoying the quiet, perhaps doing a bit of “Spring” cleaning, maybe cooking or baking things that I wouldn’t otherwise have time for, and usually reading the hours away. But for my Taiwanese friends and students, Chinese New Year is like the Fourth of July, Thanksgiving, and Christmas all rolled into one. In other words, it is a very important family and national holiday. For me, it’s usually just a nice week off from school.

This year, the break began in the usual way for Charles and me, but near the end of the week, we had a very special cultural experience: we celebrated Chinese New Year’s Eve with a Taiwanese family. Ready for the story? Here we go.

We dropped off Emi (our 4-year-old Maltese) at a friend’s house before making the trip down to Kaohsiung. We usually take her with us, but this time we were fearing the traffic and anticipating a much longer than usual drive. Emi has never been around other dogs, so when our friend’s dog, Missy–a Maltese that could be Emi’s twin–wanted to play with Emi, Emi just ran away scared. This created quite a cute game of ring-around-the-living-room until Emi found and cowered in her cage. Emi did warm up to Missy eventually, so we’re happy we left her behind in Taichung because it made our day-long trip to Kaohsiung much easier.

We began our drive to Kaohsiung, and we were surprised by how light the traffic was. We were braced for a 5-6 hour trip, but we ended up making it in record time (about 2 hours and 15 minutes). We were so thankful that traffic was not what we had been warned it might be. When we arrived in Kaohsiung, we had time to see my sister and even to nap and rest a bit before the big event.

At about 4:45 p.m., we drove into Dashe to the restaurant that our friends own (the restaurant was closed for business, and that’s where we would have the family meal). My sister, Sara, attended the dinner with Charles and me, and all three of us were decked out in red shirts as red is the customary color of celebration in Taiwanese culture. When we arrived, our friend Ah Hang and her husband were just getting things ready for the evening, turning the lights on and preparing the table.

In the restaurant, the family has a god shelf (a stand with an idol, incense, and other religious artifacts). One common practice for Taiwanese families is to worship the family gods or idols as one of the first events of the new year. As we walked into the restaurant, we were met with the strong smell of incense. For the first 30 or 45 minutes, our host was preparing the god shelf, burning incense and the wrappers from rolls of coins, and bowing in prayer to the idol (called “bai-bai” in Chinese). During this time, both of the children (James and Baby Girl) were brought out, so we played with them in the background while our host worked at his task. 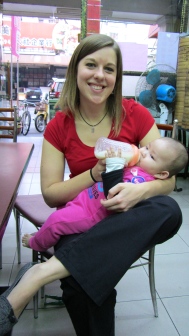 While all of this was going on, Ah Hang was busy in the kitchen preparing a scrumptious meal for us. I walked back to the kitchen to see if I could help her with anything, but I was way out of my league! She was deep-frying shrimp and preparing a plate with sliced pineapple for the shrimp to be placed on. The most I could do was help carry out a few finished dishes to the table. As I was going back and forth, Sara and Charles entertained the kids. 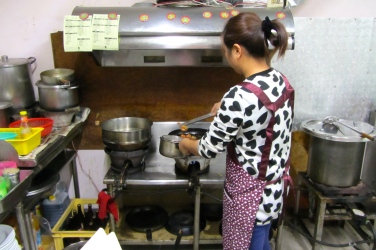 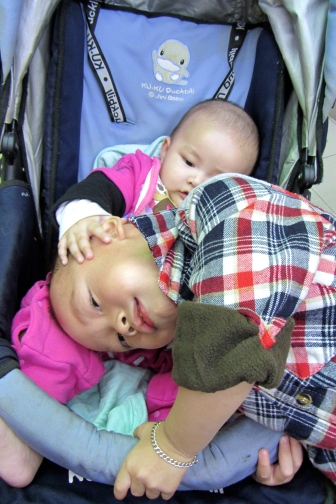 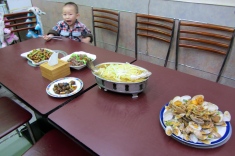 The full meal consisted of fried shrimp, beef with spring onions, a Hakka tofu gan (dried tofu) dish with meat, squid, and vegetables, a leafy vegetable, fish soup, seasoned clams in the shell, and a full fried fish in pineapple sauce. Everything was delectable, but especially the fried fish was the best fish I’ve ever eaten. Another interesting element to the meal was a fruit drink that was served to everyone. Typically Taiwanese people do not drink anything with their meals. Sara and I both had the same thought when we saw the drinks: our hosts made them just for us since they always see us drinking tea or juice when we come to the restaurant. What a sweet and sensitive gesture on their part!

As we sat down to partake of the meal, Ah Hang and her husband said something about praying. Now remember, all of our conversation during this evening was in Mandarin, so sometimes things were lost in translation. At first, I thought they were saying that they would pray. Then Ah Hang explained to me: “We don’t pray. We just start eating. But you can pray if you want to.” This was such a wonderful opportunity and such a thoughtful offering on the part of our hosts. I looked at Sara and Charles and said, “Well, then, let’s pray.” In English I prayed, “Dear Lord, thank you for these wonderful friends. Thank you for their hospitality and this food. May you bless them during this new year to come. Amen.” As I said “amen,” our host said, “xie xie,” or “thank you” in Chinese. I was really surprised and blessed by this opportunity to pray for the family in their own home. I hope and pray that someday I’ll have the chance to tell them more about Jesus, but for now I’m just happy that they recognize us as Christians and are accepting of that. 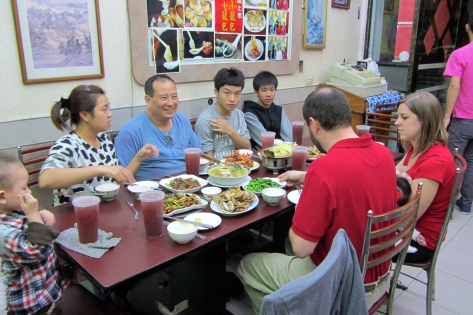 The meal was really superb, and it was fun to sit with the family and watch them relax and enjoy each other. We caught some of the conversation, but mostly Sara, Charles, and I just sat back and enjoyed being adopted as part of the family. At one point Ah Hang said in English, “My family always smiles and laughs.” We smiled and told her that ours does too. What a beautiful connection to make. Ah Hang was the perfect hostess, dishing food into our bowls and making sure we always had plenty to eat. All three of us were full and satisfied by the time the meal was over, and I think the rest of the party had had their fill as well.

Hong Bao for Everyone

After we had all eaten, Ah Hang and her husband disappeared into the back room, and soon reentered with “hong bao,” or red envelopes, in their hands. They gave out the envelopes to their children and to each other, and they even had some small ones for us as well. We pulled out our red envelopes and gave them to the children. We were very happy that we had prepared our red envelopes and had something to give at this moment. Along with the money, we included a Bible verse in each of the envelopes. We hope that the words of blessing from the Scripture will encourage our friends.

Sara had to leave soon to get home for the babysitter who was watching the little girl that Sara is fostering, but before she left, we snapped a few photos of the group.

After Sara left, I asked Ah Hang if we could help her clear the table and clean up. She laughed and said, “That’s what the children [the older ones] are for. That’s why we give them red envelopes!” So, we moved to another table off to the side, and the older boys cleared the dinner table.

Charles and I sat and talked with Ah Hang for another 45 minutes or so. When I told my dad our story later, he laughed and said, “Well, you don’t speak much Chinese and she doesn’t really speak English. What did you talk about??” That’s what’s amazing. We talked about a lot of different topics: the children, Chinese New Year customs, our ages and birthdays, what Charles and I do at the school, Ah Hang’s family back in Vietnam, and more. Before going to the dinner, I had prayed that God would give me the words to say and the understanding that I needed to make this a good and successful evening. I truly believe that He helped guide our conversation and brought to mind the vocabulary that I needed to communicate. He also gave me the peace to enjoy the conversation and our time with Ah Hang and her family.

Before going to the dinner, Sara, Charles, and I were all rather nervous. We weren’t sure what to expect, and we were just hoping that we wouldn’t commit any grave offenses or come upon any strange situations that we didn’t know how to handle. God more than answered our prayers and gave us a wonderful evening with a loving family. I echo what I wrote in my previous post about this family: I hope that this is just one more chapter in a long story of friendship. My guess (and prayer) is that there is more to come. So stay tuned.

A Bit About Me

I am a Christ-follower, a daughter, a wife, a sister, and a mother. I am a lover of literature and writing. I find refreshment in creating art and in making music. I am a world traveler, and though I call the U.S. home, a big chunk of my heart is in Taiwan.